Breast cancer is one of the leading causes of female mortality around the world. It is one of the most common cancers diagnosed in women, only second to invasive cancer of the skin. The well known statistic that one in eight women will get invasive breast cancer is a halting reminder of just how common this disease is. Another figure that drives this point home is that one third of cancers that are diagnosed in women are breast cancers.

When a woman feels a lump or some pain in her breast, it is obvious that something is wrong. But the benefit of radiological studies is that they can detect a disease before it causes any symptoms. The most commonly used and overall most useful imaging study for the detection of breast cancer is the mammogram. It can detect most breast cancers at least one year before they can be felt by the patient or her physician. It is relatively cheap, widely available, and very accurate. Along with other advances in treatment modalities and increased public awareness, breast mammography has contributed significantly to the reduction of mortality rates of breast cancer. Since instituting breast cancer screening using this test, the mortality rate has sharply diminished. Between 1990 and 2010: the mortality rate from this disease has dropped by an estimated 34%.

What is a mammogram? 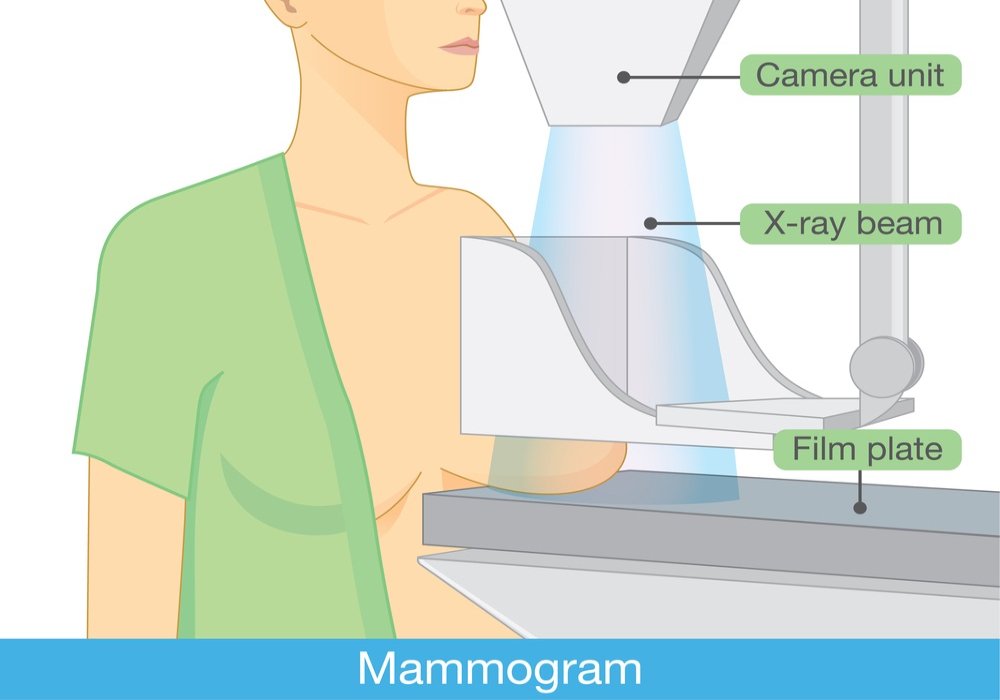 A mammogram is a special imaging study that uses X-rays to check the breast for any pathology. A machine produces the X-rays, which penetrate the breast tissue. During this process, the more dense the tissue, the more rays are absorbed. This is why in conventional radiographs: bones, which are very dense, appear white, while the lungs, which are far less dense, appear black. This principle is the basis of a mammogram’s ability to detect abnormal structures in the breast. Typically the xrays are shot from two different angles at least: the craniocaudal and the mediolateral oblique. This is useful because if a radiologist sees two or more overlapping structures, he/she will need to look from another angle to assess them properly.

For context: Xrays are a form of electromagnetic radiation. They were discovered in the 19th century by the German physicist Wilhelm Röntgen. He named them xrays to signify their elusive and unknown nature. The famous story which paved the way for the medical usage of xrays is that Röntgen photographed his wife’s hand with an xray machine. It was the first xray image taken of a human, and it showed the bones in unprecedented detail, in addition to the wife’s ring.

Technically speaking, a mammogram can be taken in two formats: digital mammography and film mammography. Film mammography pastes the xray image onto a physical film, and requires a proper light source to read well. Digital mammography creates an image on a computer. This type of radiography offers the advantages of using a lower dose of radiation, having higher contrast resolution, and giving the radiologist the ability to zoom into specific parts and change the contrast and brightness as well. Since digital mammography is more accurate with dense breasts, it is the better modality to use in younger women who have not yet hit the menopause period.